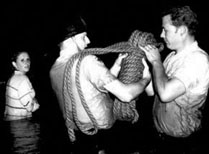 Tulsa has grown up with flooding. Many of the causes are locational: The city is based on a wide river, in a zone of violent storms, and on a frontier where a man had a right to do as he wished with his land.

By 1920, the town had outgrown its raw, boomtown image. As riches mounted and investors and speculators poured in, Tulsa grew to a wealthy city of 72,000. Development edged closer and closer toward the river.

On June 13, 1923, the river flooded Tulsa's waterworks, caused $500,000 in damages ($7.3 million in 2017 dollars), and left 4,000 homeless. City fathers responded with Tulsa's first land-use plan, which envisioned upland boulevards and housing. In the lowlands, such as Mingo Creek east of town, would be generous parks and recreational trails.

The waterworks moved to higher ground, near a band of Bird Creek bottoms that became one of the nation's largest city parks. That far-sighted preservation of Tulsa's 2,800-acre Mohawk Park was destined to save the city innumerable future flood losses. 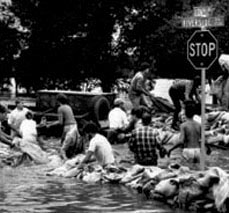 The major impact first came to Tulsa during World War II. As an emergency national defense project, and in response to 1943 flooding, the Corps built levees around Tulsa's oil refineries along the Arkansas River.

By 1950, in the post-war building boom, housing was fanning out, onto the floodplains to the south and east. Land that had periodically flooded with little harm now was awash in wave after wave of urban flooding.

By the late 1950's, flooding of newly developed subdivisions along the river spurred calls for flood control. In 1964, the Corps completed Keystone Dam 15 miles upstream from Tulsa. For years to come, Tulsans would believe that the Arkansas River was forever tamed.

Tulsa enjoyed another boom in the 1960s, when the city's population grew 25 percent. Tulsa's rapid growth required pastures and meadows to be piped and paved, as new buildings continued to spill into the lowlands of the creeks and streams that etch the area. The rapidly urbanizing Mingo watershed was annexed to the city in 1966.

Floods struck every two to four years during the 1960s and early 1970s. The response was classic: emergency response and recovery, reconstruction as quickly as possible, and denial of the possibility that floods could reoccur.

Flood control structures offered spot protection but sometimes caused offsite problems. They also could produce a false sense of security that lured more development into floodplains, flirting with catastrophe. To compound this problem, the value of the induced growth was counted as a benefit in project evaluations.

In the 1960s, this problem was illuminated in the landmark House Document 465, A Unified National Program for Managing Flood Losses. In response, the late 1960s brought Presidential Executive Order 11296 espousing floodplain management and the National Flood Insurance Act of 1968, which made federally subsidized flood insurance available to communities that agreed to adopt minimum floodplain regulations to stem future losses.

Angry, drenched victims waded out of the floods to demand help. They contended the city wasn't enforcing NFIP regulations. They tried to halt development, to avoid deeper flooding until existing problems could be solved. Developers objected strenuously.

Thus began a community debate over floodplain management, locally called "Tulsa's great drainage war," destined to last years. The city responded with a plan to widen part of Mingo Creek, including clearance of 33 houses in the right of way. The houses were removed just before the next flood.

The 1976 Memorial Day Flood marked a milestone in Tulsa's search for flood solutions. A three-hour, 10-inch deluge was centered over the headwaters of Mingo, Joe and Haikey creeks. The resulting flood killed three and caused $40 million in damages ($172 million in 2017 dollars) to more than 3,000 buildings.

By this time, the victims were becoming skilled lobbyists and gathering sympathizers citywide. They stormed City Hall.

In 1978, an earth change ordinance was also adopted, giving the city control over alterations to Tulsa's landscape, including floodplains and stream channels.

The Nonstructural Era of Stormwater Management
The Nonstructural Era, a third major phase of stormwater management, began with the President's 1978 Water Policy Initiative. It recognized the need to place nonstructural techniques on a par with flood-control structures and to preserve the natural values of floodplains and wetlands.

To curb continuing losses, in the early 1980s the federal government developed the Federal Inter-agency Hazard Mitigation process. In the days after disasters, federal teams were dispatched to identify hazard mitigation opportunities basically ways to make the response to each disaster reduce the scope of the next one. The mitigation concept focused on correcting the causes of losses, including removing, raising, or flood proofing the most vulnerable of the damaged buildings.

Tulsans worked with the Federal Emergency Management Agency to develop the process. Tulsa's early exposure to the new FEMA mitigation program was to have a significant impact on the city's response to future floods.

The 1984 Memorial Day Flood, the worst in the city's history, was Tulsa's watershed point.

After a muggy Sunday afternoon, a stalled cool front produced some 15 inches of mid-night rain, centered over Mingo Creek but also extending across most of the city. The results were disastrous.

The newly elected mayor and street commissioner had been in office for only 19 days, but both knew the issues well. In the darkest hours of the city's worst disaster, they pledged to make their response reduce the likelihood that such a disaster would ever be repeated.

Before daylight, they had assembled the city's first Flood Hazard Mitigation Team to develop the city's strategy.

Within days, a new approach to Tulsa flood response and recovery was born.

It was only the beginning.

A Unified Program was created after the 1984 flood. The work didn't end with the initial flood response and recovery. In fact, it was only the first step in a long and continuing journey to make Tulsa floodsafe.

The 1984 flood also persuaded Tulsans that a coordinated, comprehensive stormwater management program was needed from the rooftop to the river.

The Department of Stormwater Management in 1985 centralized responsibility for all city flood, drainage, and stormwater programs.

A stormwater utility fee was established by ordinance in 1986 to operate the program. The utility fee ensures stable funds for maintenance and management, independent of fickle political winds. The ordinance allots the entire fee exclusively for floodplain and stormwater management activities.

The 1986 Arkansas River Flood was a first test of the new stormwater management program. It also served as a reminder of the finite protection of Keystone Dam. Between September and October 1986, Keystone Reservoir filled to capacity, forcing the Corps to release water at the rate of 310,000 cubic feet per second. Downstream flooding was inevitable. At Tulsa, a private westbank levee failed, causing $1.3 million in damages to 64 buildings. The city fielded its hazard-mitigation team and cleared 13 substantially damaged structures.

Institutionalization and acceptance came in the 1990s, after Tulsans approved a change in city government from the mayor-commission to the mayor-council form.

A new Department of Public Works consolidated all public works services. Stormwater management was reintegrated and finally institutionalized into the city structure.

Today, storm drainage management is generally an accepted part of the city's services and now part of the Streets and Stormwater Department.

The greatest testimony to the program is that, since comprehensive regulations were adopted in 1977, the city has no record of flood damages to any building that complies with those regulations.

In the early 1990s, FEMA ranked Tulsa first in the nation for its floodplain management program, allowing Tulsans to enjoy the nation's lowest flood insurance rates. The program was also honored with FEMA's 1992 Outstanding Public Service Award; and the Association of State Floodplain Managers has twice given Tulsa its Local Award for Excellence.

Leaders consider the Tulsa program still in progress. They know that much remains to be done, and that there is an inevitable next flood ahead. The program continues to evolve.

The Watershed Era of Comprehensive Management
The Great Midwest Floods on the Mississippi and other heartland rivers in 1993 caused more than $10 billion in damages to 72,000 structures and, in some cases, entire communities.

The 1993 Midwest floods spurred national leaders to re-examine their programs. Although Tulsa was not directly affected, local leaders also took advantage of the lessons that the nation was learning. The 1993 floods served as a catalyst to launch a fourth era in the nation's attempts to stem disaster losses, according to Dr. Gilbert F. White, a leader in national floodplain management for the past 50 years, and Larry Larson, Executive Director of the Association of State Floodplain Managers.

That new era looks above and beyond the floodplains, beyond response to a specific disaster, and takes a longer and broader view.

"It examines in an integrated fashion the whole regional floodplain environment," White says. "It is a program which takes into account the human values, the local resource decisions, the whole pattern of local community management as it is related to flood-hazard and the floodplain."

"Until this year," says Larson, "the government mostly helped people rebuild at risk of the next flood. A monumental change has occurred in federal attitudes and programs that assist people and communities in flood recovery. That change will result in relocation of structures out of flood hazard areas or elevation above flood levels with government assistance."

This new direction is a comprehensive, regional approach to long-term solutions, based on collaborative partnerships mirrors the best of Tulsa's local goals and priorities.

But remember, flood risk still exists. The long journey and hard lessons continue. In the words of a former Tulsa mayor, "We're all learning together."