In the early part of the twentieth century, Tulsa began to establish itself as the main urban center of the region, outgrowing such nearby communities as Sapulpa and Sand Springs. For Tulsans, the primary source of water was the Arkansas River, which distinguishes itself primarily by its high sediment-load and barely tolerable salt content. A water pumping plant was built in 1904 to deliver Arkansas River water to consumers. However, water that came out of the tap was often so silty, it resembled chocolate syrup. Because of the high gypsum and salt content, the water was essentially unuseable for cooking or drinking.

Many rural residents dug wells for water, tapping the irregularly distributed freshwater pools in the Paleozoic sandstone and limestone formations of northeast Oklahoma. As often as not, water wells produced only hard, salty water or turned dry after only short periods of use.

The 1900's and 1910's were boom days for Tulsa: oil was found in abundance in every direction around the city. Giant producers such as the nearby Glen Pool and Cushing fields created wealth on an unprecedented scale and laid the groundwork for cultural and economic developments that exist to this day.

With oil bringing new people to the region (Tulsa eventually became the home of more oil companies than any other place), demand for drinking water became ever higher. Since no self-respecting city should serve salty muddy river water to its visitors and citizens, the decision was made to create a permanent, high-quality, and reliable source of fresh water. 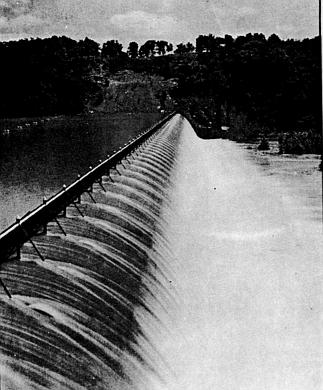 In 1922, work began on construction of a pipeline to Spavinaw, a hamlet located 50 miles east and north of Tulsa. Here, the Spavinaw Creek Dam created Spavinaw Lake, which was to become the primary source of drinking water for the city for the next 55 years. Fed by Spavinaw Creek, a crystal-clear perennial stream draining 400-square-mile area of unspoiled Ozark wilderness, the Spavinaw Reservoir project promised to deliver an abundance of high-quality drinking water to Tulsa.

For its time, the Spavinaw project was extremely ambitious. The project cost $7.5 million ($262 million in todays money) for a town with a population of about 70,000. Once completed, Spavinaw Reservoir was the largest lake in Oklahoma (virtually all lakes in Oklahoma are man-made reservoirs) and the pipeline carrying the water to the city the longest in the U.S. at the time. The pipeline became operational in 1924, when Spavinaw water first flowed to the Mohawk pumping station for general consumption by Tulsans. Five years later, treatment facilities were added at the water plant, and the Mohawk Water Treatment Plant began processing Spavinaw water.

Tulsa's thirst for water continued to grow, as the city expanded and incorporated surrounding developments, taking over the local water supply systems and hooking them to the Spavinaw water. In 1950, construction began on a second flowline to Spavinaw. In order to assure the water supply from the reservoir, a second lake was created with the construction of the Eucha Dam in 1952. Lake Eucha acts as an environmental and hydrologic buffer for Lake Spavinaw, assuring a constant supply of clean water through the connecting stream, which flows through a protected Scenic Rivers area. The second Spavinaw pipeline became operational in 1954, doubling the raw water supply for the city. 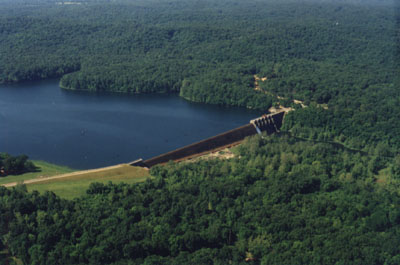