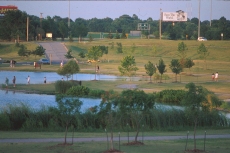 Tulsa, Oklahoma, has been called America's most American city, because the age, race, income, and attitudes of our citizens reflect the United States as a whole. We're a test market for new products; if it works in Tulsa, it has a good chance of working elsewhere.

Tulsa's flooding problems also mirror many other towns. Our community was founded a hundred years ago on a major river and has a long history of floods, compounded by post-war growth, floodplain development, and frequent rainstorms.

By the 1980s, Tulsa's flooding had reached singular proportions. The federal government had declared Tulsa County a flood disaster area nine times in 15 years, more than any other community in the nation. Each flood was worse than the one before.

The most devastating flood in our history hit in the mid-night hours of Memorial Day 1984. Our City responded to the shock of this killer flash flood with community-wide commitment to end our recurring disasters. Determined leaders crafted a unified program to curb flood losses.

Today, Tulsa's floodplain and stormwater program is based on respect for the natural systems. It includes comprehensive watershed management, dedicated funds for maintenance and operation, a prototype alert system, and a $200 million capital improvements program.

This program is more than flood control. We're building parks in the floodplains, sports fields in stormwater detention basins, and greenway trails on creek banks.

We are forging strong partnerships with federal and state agencies.

And we've stopped creating new problems. Since the City adopted comprehensive drainage regulations, we have no record of flooding in any structure built in accord with those regulations.

Because the federal government gave our program its highest ranking, Tulsans enjoy the lowest flood insurance rates in the country. We are reaping benefits from national awards and favorable publicity.

We're still building our program, and we're still learning. We know our location in "tornado alley" guarantees that Tulsa will flood again, and we're working to prepare for that inevitability. But, without question, we've come a long way. Tulsa's progress has been called an example of what can happen when a community fully commits to solving urban problems.

Like many other U.S. communities, our experience didn't come easily.