The Creek Council tree, a mature post oak, marks the traditional "ceremonial ground" chosen in 1836 by the Lochapoka clan of the Creek Indians. In 1834, they had begun their involuntary migration from Alabama under the control of the U.S. government.

It was a slow and painful trek and of the original group of 630, 161 died in route. In 1836 they arrived on a low hill overlooking the Arkansas River and here they marked their arrival with a solemn ceremony depositing ashes brought over the trail from their last fires in Alabama.

The Tulsa-Lochapoka, a division of the Creek Nation, established their "town." The park is often referred to as Tulsa's first City Hall. As late as 1896 the Tulsa-Lochapoka gathered here for ceremonies, feasts and games.

Today, commemorative tribal ceremonies are held each year.
The park features an ethno-botanical garden displaying plants that were used by the Creek Indians for food, fiber, ceremonial and medicinal purposes. Interpretive signs identify the plants and provide information about their use. This park is protected by Historic Preservation zoning and is listed in the National Register of Historic Places. 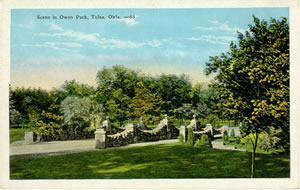 It could be said that Tulsa Parks began with a bang - literally. On January 23, 1904 at 4:15 p.m., a tremendous explosion rocked west Tulsa and was heard as far away as Claremore. The entire stock of nitroglycerine belonging to the Western Torpedo Company that was used for shooting oil wells was accidentally detonated shortly after a company employee named McDonald entered a wooden structure where the explosives were stored.

Needless to say, Mr. McDonald did not survive the blast. The explosion created a large crater that eventually was used to create what became known as Owen Park Lake and years later was made much smaller and is now known as Owen Park Pond. 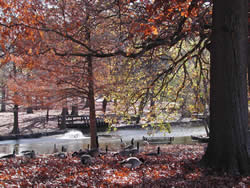 Although the City of Tulsa did not purchase Owen Park until 1909, the area was already being used for major citywide events. In September of 1906, a Labor Day celebration, complete with a parade that began in downtown Tulsa, speeches, games, and sports was held.

Thousands of people were reported to have come there to enjoy band concerts, food and fireworks each July 4th for several years prior to 1909. That year, the city bought the land from Chauncey and Mary Owen for $13,500 and Tulsa's first park became a reality.

Owen Park was a natural beauty spot with its grove of beautiful oak trees and pure well water. Swimming in the lake was very popular from 1913 through the early 1920s.

There was a sand beach with lifeguards as well as a bath house to accommodate swimmers. The lake also was used for ice skating during the winter months.

The Tulsa Park and Recreation Department has a history dating back over 100 years. It first came into being on August 18, 1909, when the City of Tulsa bought Owen Park from Chauncey and Mary Owen for $13,500. Tulsa's first Park Superintendent, John Meisenbacher, later moved into a house located on the park. Park Board meetings were held in a room above his garage. After some spruce-up efforts with the planting of 600 roses, Tulsa's first City park officially opened on June 8, 1910.

Tulsa was growing in the early 1900s and residents felt the need for open space within a town to escape the rigors of new urban life. Parks came to have a special value to citizens of the day.

Shortly after Owen Park was acquired, Woodward and Central parks were added to the new park system. A Park Commission also was responsible for developing a boulevard system to beautify the city with flowers, trees and scenery. The Park Department's early years emphasized horticulture. Recreation was an afterthought. Parks were mostly places to relax and enjoy the scenery.

More land was needed and in 1912, voters approved the first park bond issue to purchase tracts of land and fund cheap improvements. It was during these years that the popular attraction, Orcutt's Lake at 21st Street and Utica Avenue, became Swan Lake and came into the Park's fold. The Park System was established in 1918.

The largest park in the system, Mohawk Park, was an afterthought of the Spavinaw Dam that brought water to Tulsa in 1924. An early public- and private-sector partnership, Mohawk's purchase was engineered by a trust comprised of prominent local citizens. Voters then passed a bond issue to buy the trust's option on the park, making it a City property.

In 1925, the first written minutes of the Park Board were recorded. In them were noted the total area of parks - nearly 3,000 acres - and the facts that there were no office facilities, no system for keeping track of tools, equipment and no plans for handling maintenance or development.

The role of a park changed in the 20's and 30's. When the urban life became an accepted fact, people looked to the parks to provide scheduled activities. W.O. Doolittle, the first park superintendent, was hired in 1926. His pay was $325 per month plus a house and car. He filled the superintendent position until 1937 and left his mark on the department by the movement to recreation programs. Horticulture was de-emphasized as he created summer programs, improved facilities and hired recreational leaders.

The 1920's saw continual growth with the first park bond issue for development of Newblock Park, the dedication of Tracy Park wading pool, purchase of Lincoln and Springdale parks, building of roads at Mohawk for golf and zoo and a $150,000 bond issue for public improvements.

Tulsa's economy suffered during the Depression in the 30's but the Park Department profited from work programs. The Civilian Conservation Corps and the Works Progress Administration workers cleared outlying parks of everything but trees and helped build the Rock Garden and Rose Garden at Woodward Park.

The National Park Service took over planning of structures in Mohawk Park from the City Park Department. The WPA workers built bridges, roads and shelters to blend in with the natural landscape. They also brought waterlines and restrooms into Mohawk for the first time.

Parks were now a chief source of leisure for the public. So when O.E. Zeigler, a disciple of Doolittle, became superintendent in 1937, he further developed recreation programs. People crowded into City parks on nights and weekends in the 30's, 40's and 50's. The City created a Recreation Department in 1946.

A 1947 study discovered Tulsa had 10 acres of park land to 4,615 people. The standard ratio was 10 acres per 1,000 people. The Department was handicapped on correcting the problem by an unusually small operating budget. Recreation leaders were underpaid and there were no year-round programs.

As the city grew after World War II, there was an urgent need to acquire park land in the new residential developments. Voters passed bond issues for acquisition and capital improvements on a regular basis until the mid 60's, but the parks still lagged behind the booming population increases. A bond issue in 1952 built much of the park system. The Garden Center was purchased and playgrounds and pools were added to many areas. George Taylor was appointed program and recreation director.

For years, the Park Department was directed by the same board as the airport. The political importance of the airport did not allow adequate time for the direction of the ever-increasing park system. With the separation of the boards in 1958, the Park Department took on a new look and Gilcrease Museum was added to the department, Mohawk was revitalized, new arts and crafts programs were offered and a year-round recreation program was initiated.

Funding took a new turn in 1960, when through a Park Department initiative, a partnership was formed with Tulsa Public Schools to take advantage of federal programs. The Community School Coordinating Committee was established. This led to facility exchange and the joint use agreement in 1963.

Recreation was formally joined with Parks and in 1961, Bob Hunter became the first Parks and Recreation Department director.

Bond issues became tougher to pass and in 1969 an omnibus bond issue failed.

In 1972, voters passed a $13 million bond issue that was matched with $3 million in federal funds to build park facilities. Oxley Nature Center was established in Mohawk Park in 1974 and private monies in 1977 allowed for its development.

Hugh McKnight became the director of the Tulsa Park and Recreation Department in 1975 and retired in January 2001. During his tenure, the last two recreation centers, Manion and Hicks Parks, were built in 1976. The next year held major reorganizations in store for the Zoo. An investigation of animal care led to the end of Tulsa Zoological Society and the creation of a group that later became Zoo Friends.

Mary Ann Summerfield became the department director in July 2002 and retired at the end of 2007. During her time in the position, private/public cooperative efforts were instituted resulting in more than $1.4 million in donations for the construction of new park facilities including a new 12,000 sq. ft. community/senior Central Center at Centennial Park. It opened in 2006 and continues to be one of the more popular park facilities in Tulsa.

Hitting on all cylinders after 110 years, Anna America now serves as director of the Tulsa Park and Recreation Department. Anna's vision is one of engaging Tulsa's citizens and community partners to help guide Tulsa Parks' future as we move on into the next century.